One of the benefits of having a bit of time off (and being banned from Slack, Bugherd, email etc) is that I am getting a little bit of time to step back and think through some of the things that I wanted to achieve on the ‘Beta & beyond’ that somewhat get pushed to the side in the day to day hustle to get things done (I know I should be doing something more relaxing but I am who I am!)

Somewhere in our meeting room there is an index card on wall where I scrawled pretentious something like – “Be a key node in the ‘web of data'”. Now we are getting to the point in our development of the website where we can focus in on the ‘data’ opportunities so I have been thinking about just what was it that I meant!

So as I mentioned in a tweet Friday my idea of a ‘web of data’ was initially inspired at the height of the rounded corners, missing vowels, colour gradients web 2.0 by this presentation from Tom Coates at FOWA [PDF]. In particular the ‘Architectural Principles’ he laid out (the bold is mine – these are the ones that have always stayed with me);

1. Look to add value to the Aggregate Web of data
2. Build for normal users, developers and machines
3. Start designing with data, not with pages
4. Identify your first order objects and make them addressable
5. Use readable, reliable and hackable URLs
6. Correlate with external identifier schemes (or coin a new standard)
7. Build list views and batch manipulation interfaces
8. Create parallel data services using understood standards
9. Make your data as discoverable as possible

and this slide which articulated the vision for it all; 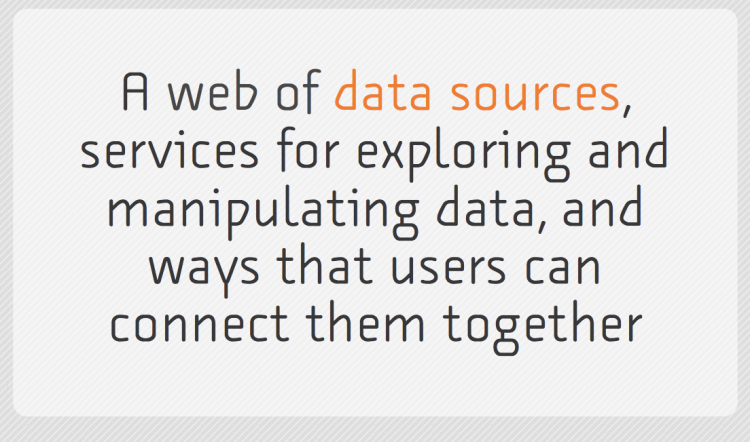 This was a decade ago. Safe to say for the most part things went a different way on the web but it stuck with me.

Then in 2009 at (I think) the second GovCamp Jeni Tennison wrote a blogpost outlining her ideas for quick (ha!) wins towards Government websites getting to a ‘website is your API’ type situation.

In particular the thinking around the importance of well thought out URIs and surfacing existing unique identifiers (like our own CDIDs) in those URIs has always stuck with me (as well as really being the 1st time I understood all the server response stuff.) I wasn’t working in a situation where I could influence the implementation of those ideas back then but again they stuck with me.

Then last year I came across this blogpost from Duncan Cragg about ‘Link all the things’ <– this is the closest I think to touching on 'Linked Data' principles (although Duncan doesn't agree) but I do think the differences, while subtle, are enough to overcome my prejudices! His four principles are useful targets I think, even if to really have a wider effect they need greater take-up than just one site (albeit one with a LOT of data);

1: URLs Pointing To Data
2: URLs Inside Data
3: Data Looks The Same If It Is The Same
4: Publish Derived Data and Link Back To Sources

Anyway there have been a lot of other other posts over the years that have influenced my thinking (URI design is a particular favourite topic) but these are the three posts that I come back to most often – although a long lost post from someone at the BBC that introduced me to the idea of 'your website is your API' has sparked many failed Google searches.