Eleanor has written this really great post on the problem with being a ‘shit umbrella’. There is a lot in there I recognise from an earlier version of myself – I definitely went through a stage of being both paternalistic and a bit of a martyr (though I did have my own umbrella!) but with some distance and more experience I came to see the error of my approach (not until after I’d burned out!). I didn’t lose faith in the idea of being a shit umbrella though. My understanding of it just evolved.

As I said in a tweet last night I think the thing about an umbrella is it keeps the rain off you for the most part but you still know it is raining and you do get a little wet…that is the goal – stop the team getting drowned but never hide the fact that it is pissing down.

Good, empowered teams should all have a responsibility for watching out for changes in the weather – it effects what can be achieved and things like a shift in strategic priorities, a changing risk appetite or simply new leadership in an organisation can have a real impact in the trenches. That said I do think it is the responsibility of the Product Manager to act as the meteorologist – watching, analysing and communicating what to expect – giving the team enough notice to get under the umbrella when the shit starts falling!

For better or worse that is what ‘be the shit umbrella’ means to me. YMMV. 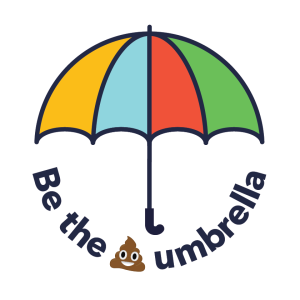