Today in a change to the advertised schedule I was lucky enough to be invited to the ‘World Government Summit on Open Source‘ organised by Drupal folk Acquia just down the road from my hotel.

With Tim O’Reilly as the opening keynote and US Government CIO Steven VanRoekel also speaking it was a great opportunity to learn a little about what is going on with digital in the public sector this side of the pond.

There were other interesting speakers (in particular I enjoyed the talk by Cammie Croft about her work with Drupal at the Department of Energy) but I am going to focus on these two talks as I feel they nicely articulated a vision (Tim) and a plan (Steven).

Tim O’Reilly gave an updated version of his ‘Government as a platform’ talk that he has been talking about since about 2009 I think. I am a big fan of Tim, his company and his take on digital government so it was great to hear him speak ‘live’.

Two of the things he spoke about early on were things I’ve written about here before – namely the wonderful GDS Design Principles and also the need to take lessons from the ‘lean startup’ movement – particularly when it comes to the need for data driven decision making.

He is quite clearly proud of his association with the Code for America organisation and highlighted a couple of their flagship projects – including Honolulu Answers – a very GDS style project that used search data to decide what information people were *actually* looking for and then held a citizen ‘write-a-thon’ to actually make that content usable for people and to strip away all the bureaucratic language. The other project he highlighted was Open311 – a service that allows open data to actually be presented in a useful manner but also for community involvement as well.

[he also spoke a little about the Adopt-a-Hydrant project and how that has evolved and forked.]

An example of Government providing a platform for innovation was the story of how GPS was developed by the US gov for military applications but then opened up in the 80s for wider exploitation leading to turn-by-turn directions and, god help us, FourSquare 🙂

A big part of his talk was about the importance of open source and how it was built with an ‘architecture of participation’ – people can work independently for the greater good of the software. The same was/is true of the internet and the web as well.

He mentioned a quote from Larry Wall that I thought really should be an underlying philosophy for all of us working online;

Github also got its first, of many, mention of the day. It is clear that Github is seen as a key factor in the rise of open source in government over here.

Steven VanRoekel opened up his talk with a story about the 1st US Government open data and crowdsourcing project. In the 1850s Joseph Henry, 1st Secretary of the Smithsonian, created a network of volunteers around the US who telegraphed his staff a weather report each day and it was captured according to colour coded pins on a huge map in the lobby of the Smithsonian Castle. This eventually became the basis of the US Weather SEO Services.

Today the challenge is breaking down the Departmental silos and encouraging a new culture of innovation rather than risk aversion.

The new(ish) US Digital Strategy was publicly endorsed by the President and boils down to 6 main principles. 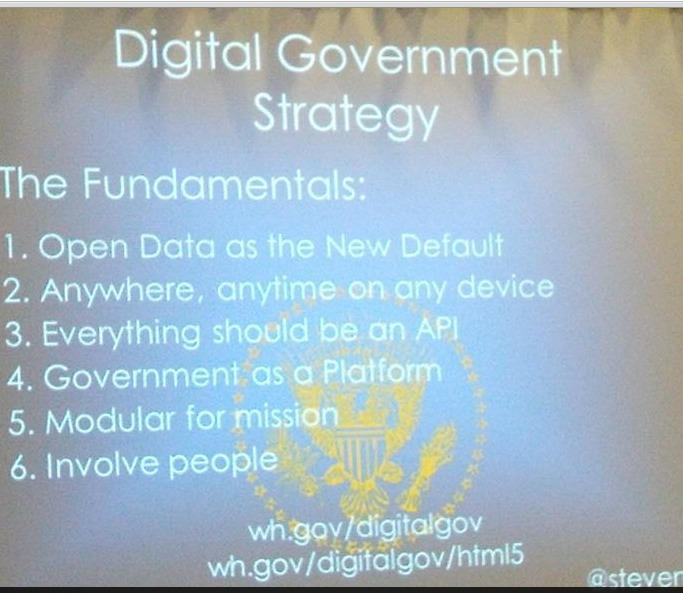 A couple of really interesting things that caught my eye were;

The other programme that got mentioned alot was the Presidential Innovation Fellows. This aims to recruit the best and brightest digital minds whatever their backgrounds to work on specific projects, six month projects for the Federal government. The MyGov project might look familiar to anyone who has looked at GOV.UK but they are all worthy projects and it is an interesting way of getting people who might not usually be drawn to public sector work to get involved.

It was an interesting insight – there are alot of similarities to how they are addressing the digital challenge facing the public sector but also alot of differences. I think GDS are ahead of the game in some respects – especially the single domain work but my take was that the US approach had its strengths as well – particularly around developer community outreach.

A really worthwhile way to spend a few hours (once I got in past the armed guards at the conference centre!) so I am very grateful for the opportunity and to whoever pulled out and freed up the ticket!

One thought on “Open source and government as a platform”