I’ve been a reasonably heavy user of social media pretty much from day one. I was an early advocate of using it as a comms channel, in the workplace and have written various guidelines, policies and strategies about how best to make use of it. The funny thing is that over the years I have rarely been in the driving seat of corporate Twitter accounts. I have overseen social media staff, and currently have a great team, and I have been around to help out but despite all my bluster I am rarely the one in the hot seat.

That changed last night though when a major website outage led to a number of us facing a late night and I decided that I could probably handle Twitter to keep people informed and answer any questions. That would allow my social media team to escape at a reasonable hour as well – they deserved it after handling the outage brilliantly during business hours.

I was like a teenager getting the keys to his old mans car [I assume – I never did learn to drive.] 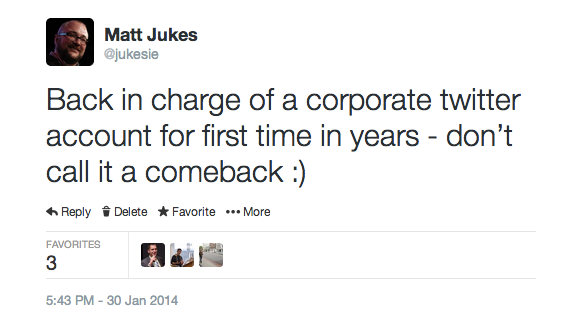 Tim Harford, who has been a critic of the site in the past but for the most part an even handed one, did us a major favour by adding an element of humour to the situation in an early tweet. People were unhappy but there was a very British dark comedy element to many of their complaints. 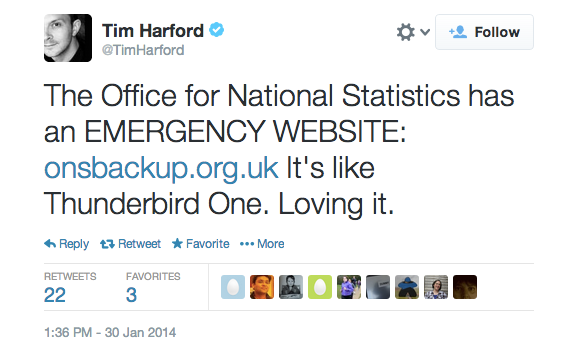 I made a bit of a snap decision that I would work with that tone rather than play it completely straight. The opportunity to put my social media principles in to practice was too good an opportunity to miss and so.. 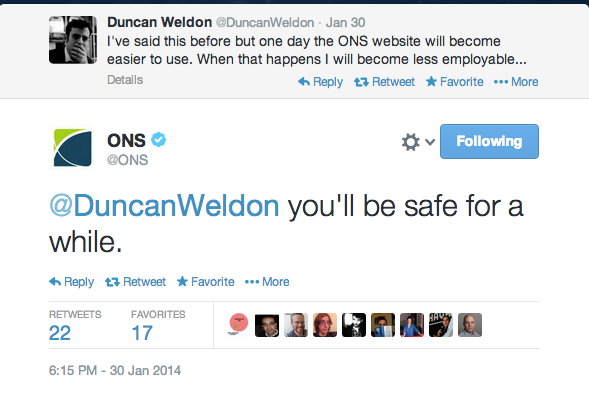 There was really no going back at that point. As an organisation we aren’t really known for our self-depreciating humour. I tried to make sure I kept the actual information updates going. 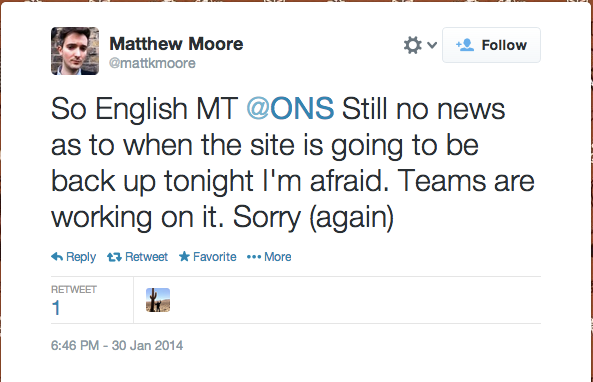 Though as you can see even these dull tweets attracted commentary.

Sometimes I had a little more fun. 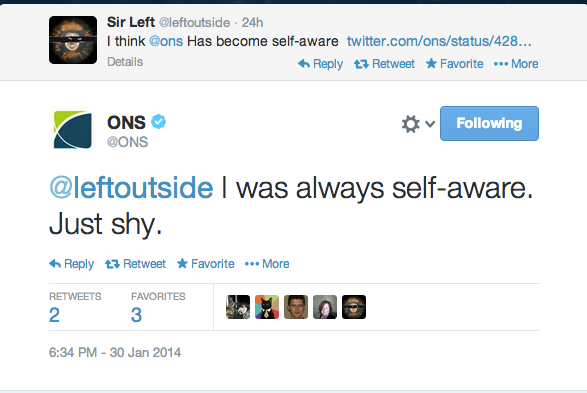 But I tried to add a little value and share some links to sites that people didn’t seem to be as aware of as they should/could have been. 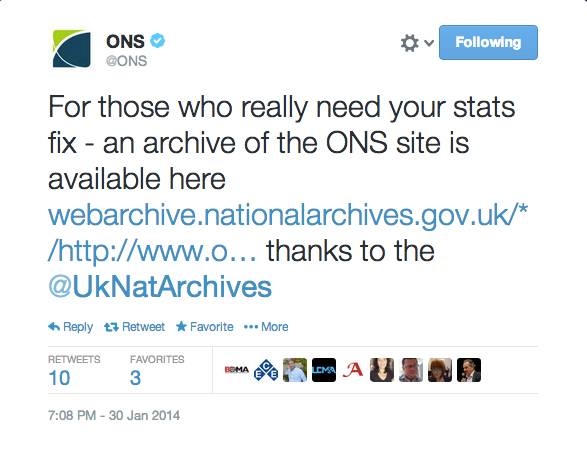 A few people seemed to think it was a decent approach.

I managed to send my final tweet of the evening at 21.55 from a train just before heading in to the Severn Tunnel. 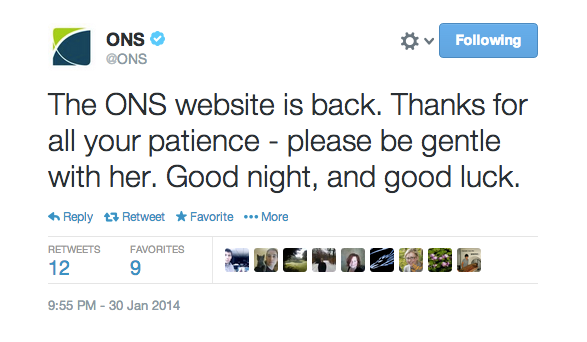 The reality is that it was my colleagues who were pulling out all the stops to get the website back up and running who were doing the real work and mainly what I was doing was trying to offer a bit of a morale boost and distraction.

I have to be honest these couple of hours late in to the evening have been a bit of a recent highlight for me personally. I’d forgotten just how much I enjoyed doing this sort of thing – and the fact it was in a difficult situation seemed to help rather than hinder. I am not sure I would recommend following my example – I do wonder if the fact I was already pretty worn out contributed to my willingness to be a little more irreverent than usual!

So how did I stack up to my ‘principles’?

1. Be myself.
Well I certainly allowed my personality to shine through for better or worse.

4. Practice the equivalent of the ‘law of two feet’.
Wasn’t really appropriate in this case.

5. Don’t engage trolls.
Actually I did avoid one or two ‘mentions’. They weren’t so much trolling as leading questions.

6. Don’t sweat the numbers. It is quality not quantity.
Wasn’t really appropriate in this case (though I got a lot of RTs, favourites and follows!).

7. Mistakes happen. Admit them. Move on.
That was kind of the entire point!

9. Don’t cross the streams.
This was hard as I was running my own Twitter account alongside and was getting tired!

Not too bad even if I do say so myself. Though I think I’ll leave it to the professionals in future and consider this a special guest appearance.